New Book: John and Anti-Judaism: Reading the Gospel in Light of Greco-Roman Culture, 2021 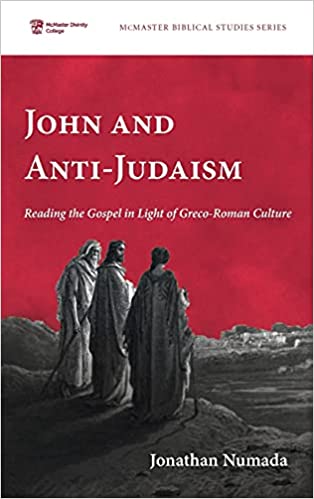 This study argues that the Gospel of John’s anti-Judaism can be well understood from the perspective of trends apparent within the context of broader Greco-Roman culture. It uses the paradigm of collective memory and aspects of social identity theory and self-categorization theory to explore the theological and narrative functions of the Johannine Jews. Relying upon a diverse range of historical testimony drawn from Greco-Roman literature, inscriptions, and papyri, this work attempts to understand the social identities and social locations of Diaspora Jews as a first step in reading John’s Gospel in the context of the political and social instability of the first century CE. It then attempts to understand John’s theology, its portrayal of Jewish social identity, and the narrative and theological functions of “”the Jews”” as a group character in light of this historical context. This work attempts to demonstrate that while John’s treatment of Jews and Judaism is multivalent at both social and theological levels, it is primarily focused upon strengthening a Christologically centered Christian identity while attempting to mitigate the attractiveness of Judaism as a religious competitor.